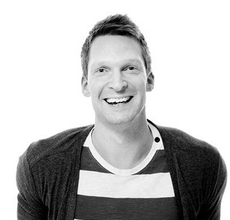 Daniel is a forty-something father of three, who lives with his wife and children in Östersund, a quaint town in the centre of Sweden.

Earlier on in his career, he worked as a developer of computer games and TV games with characters like the Moomins and Bamse the world's strongest bear.

While Daniel worked as a games developer, he came up with the idea for his first book

The Tuesday Cow (Swedish title: Tisdagskossan) and things have just progressed from there.

He has already started his next project named The Tree at the end of the World,

the first book is due to be released during the spring of 2019.

Nova and Simon are siblings, twins actually and they are so utterly bored.

They should be enjoying their summer break, but they are far from amused and figure they have to come up with something to do.

That day they decide to open a "helper agency" just to do something and spice up their summer break a little. Nova initially wanted a detective agency, but as Simon felt that was too dangerous they settled on a helper agency, which will tackle every type of problem.

The first book is "The Missing Unicorn", where the twins have to help a little gnome find his missing pet.

The second book is "The Curse of the Sea Monster", where Nova and Simon get to meet the mysterious Julian and join him on an underwater adventure with mermaids and water bearers.

The third book is "The Wicked Fairy". The twins are ready for a new case, which proves to be their most dangerous yet.  This time they visit the underworld and get to meet a whole army of fairytale creatures.

The fourth book is "The Magic Fire Berries", where Nova and Simon have to free a elf called Sessa as she is kept prisoner by some evil creatures deep inside a mountain.

The Helper Agency is a four-part series where the young reader get to join Nova and Simon on their adventures. 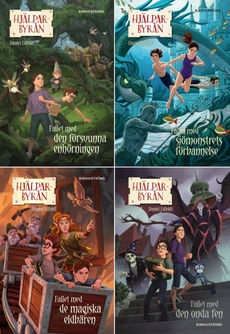 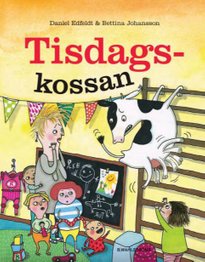 It's Tuesday and this is Vera's favourite day of the week, because on Tuesdays you are allowed to bring something

with you to kindergarten.

Vera wants to bring her cow with her and to start with the cow isn't all that keen on this idea. She would rather stay at home and munch idly on the carpet, but Vera is not taking no for an answer. She is dead set on bringing the cow with her and proceeds to put wellies onto the trotters, while the cow is doing her best to dig her heels in and refuse to be bossed about.

When they eventually arrive at the kindergarten, Vera is excited to see what her friends have brought along. Someone's brought a broken, radio-controlled car and someone else has brought a piece of Lego.

As Vera is about to show everyone what she has brought, the cow has run off and climbed up the wall bars. But how will make her way down again? The cow is a tad frightened by this point, but Vera comes up with the idea of putting soft, colourful cushions on the floor beneath the cow so that she can let go of the wall bars and land softly.

Come along and join Vera and the cow on a fun-filled day at the kindergarten.

The Tuesday Cow is Daniel's debut as an author and this is the first book about Vera.

The much desired and longed-for sequel to The Tuesday Cow is finally here.

It's Tuesday and this is Vera's favourite day of the week, because on Tuesdays you are allowed to bring something with you to kindergarten.

This time around, Vera wants to bring her little pirate friends along, but they are pretty boisterous and non-cooperative to say the least.

To start with they don't want to brush their teeth. They've never seen a toothbrush before and therefore try using it to scratch their back and brush their hair. They are not keen on washing their face either, because then they'll end up with soap in their eyes. As far as they are concerned, that is exactly why pirates wear an eyepatch.

What chaos might they create on their day out at the kindergarten with Vera?

The Tuesday Pirates is the second book about Vera. 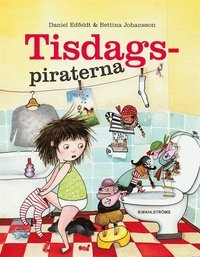